With much noise in the local press about an imminent signing of Phase II contracts in the ship procurement contract with Halifax Shipyard, physical work has started on the new launch area at the north end of the yard.
As we understand it, Phase II of the contracts is called the Definition Contract, worth multi-millions, most of which will be done elsewhere. Such yards as Maersk's former prime shipbuilding yard of Odense in Denmark, and General Dynamic's huge destroyer building yard in Bath, Maine, will carry out a lot of design and engineering work, but it will not involve the actual building of ships. That will be done in Phase III in Halifax.
In order to build the new ships, which will  be too big and heavy to launch on the current launchway, a former steelyard in the north end of the yard at pier 6 will be converted to a side launch area. Ships will be rolled northward out of the fabrication hall and then eastward to Pier 6 where they will moved onto a new floating drydock and gently lowered into the harbour and floated off.
Pier 6 is of course best known as the Ground Zero area of the Halifax explosion in 1917, where the drifting IMO came ashore after the massive explosion which devastated the Richmond area of north end Halifax.
After the explosion the area was a wasteland, but was rebuilt by Halifax Shipyard and parent company Dosco, which used it as a coal stockpile. Then in 1960 it was fitted with a series of unique steel bridge structures, supported on steel encased concrete cells.The structures, topped with concrete, acted as a pier, supporting shipyard cranes, and on a lower level some machine ship functions.
This series of photos taken in September, 1960 shows construction of the bridge sections. *
2.
3.,4.

Pier 6 was used a fitting out berth and for in water repairs, and was heavily utilised during the oil rig building program of the 1960s and 70s. 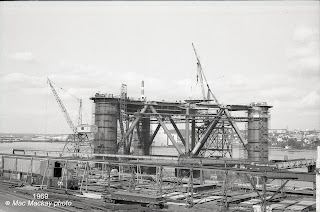 8. Oil rig Sedco H under construction at pier 6 in 1969. The steel yard on the shore had its own traveling gantry crane. 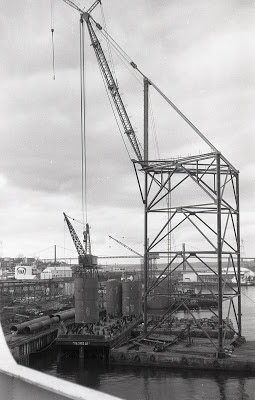 9. Shipyard crane Timberland unloads oil rig leg sections from the barge Haltren No.1 at pier 6 in 1975. The sections were built by Dosco's Trenton Works and barged to Halifax.

For the past several years pier 6 has fallen into a state of disrepair and has seen little use, except at the very north end where Harbour Development Ltd keeps some of its dredging plant..
This week demolition crews moved in and have begun to dismantle the steel bridge sections.

New work will include dredging, a new pier face 10 meters farther to seaward, a pier extension of 250 meters and new buildings, as well as the hard stand where the new ships will be transferred to the drydock for launching.
Due to a change in the Canadian Environmental Assessment Act, which came into effect July 6, 2012, there was no requirement to complete an assessment on the project.

* In the background of the 1960 construction photos are ships of the former Canadian National Steamships.CNSS laid up its ships rather than bow to union strike demands. A deal to sell the ships to Cuba fell through when Fidel Castro took over and most of the ships languished in Halifax for years until sold for scrap. Also appearing in photo #6 is the coal burning icebreaker CGS Saurel tied up at the north end of pier 6.
Posted by Mac at 9:39 PM