1. Halterm as seen from Point Pleasant Park. The new cranes will service the extended pier 42.

It was stated last week that Halterm's newest super post-Panamax container cranes will be arriving this summer.The new cranes will be installed at pier 42 directly from a heavy lift ship operated by the crane manufacturer. This will be essentially a repeat of the 2000 delivery of two such cranes to the same pier.
Shangai Zhen Hua Shipping Company has a whole fleet of converted bulk carriers, rebuilt to carry huge and heavy deck loads. Their decks are situated so that with proper ballasting the cranes can be rolled directly onto the dock from the ship.

Halterm has also applied to the Canadian Transportation Agency to use the heavy lift ship Zhen Hua 19 to move the existing crane on pier 42 (at far right in photo#1 and in the foreground of photo#2) to pier 36.As a non-Canadian ship, it must have a coasting license to carry cargo "between Canadian ports". 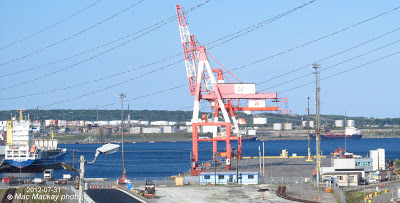 3. Pier 36 has two cranes now, one of which was built with special dollies to allow it to move back and forth to pier 41. The pier only serves smaller ships, but could handle two at a time given enough cranes.

The old smaller crane will be used at pier 36 since it is not high enough to work the larger ships at pier 42. However it is only smaller ships that can use pier 36. 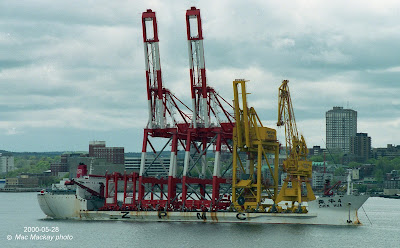 4. Zhen Hua 4 at anchor in May 2000. It also carried cranes for another port, and straddle carriers for Halterm.

The ship Zhen Hua 4 called in Halifax on two separate occasions. In May 2000 with the two cranes for Halterm, and in February 2002 with one crane for Fairview Cove. In order to pass under the bridges, that crane came on shorter legs, which were extended after the crane was landed. 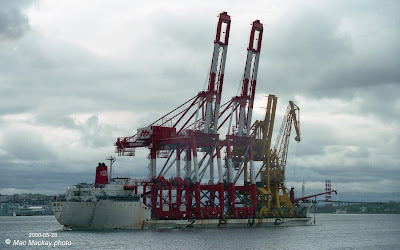 5. The new cranes for Halterm will likely come full assembled as the last ones did, since there will be bridges to pass under in Halifax. It does mean however that they must sail from China via the Cape of Good Hope.
Posted by Mac at 5:05 PM