1. Farley Mowat in tow from Halifax for Lunenburg in 1995.

With the Sea Shepherd Society once more in the headlines for its campaign against Japanese whaling in the south Pacific, one of its former ships is again on the auction block.
In  August 1996 the Sea Sepherd Society in Edinburgh, Scotland acquired a former Norwegian research and fisheries protection trawler. Built in 1958 as Johan Hort, it had been retired in 1983 and operated as a research ship, then an oil field safety and standby ship under the names of Skandi Ocean , STM Ocean, CAM Vulcan and M Vulcan.
Once under Sea Shepherd's ownership it was renamed Sea Shepherd in 1997, and Ocean Warrior in 2000, and finally in 2002 given the name of Farley Mowat, in recognition of that author's support of environmental issues.

2. Farley Mowat in a more colourful paint scheme, sails from Halifax in 2005.

In February 2005 while in Canadian waters protesting the seal hunt, the Department of Transport directed it into Halifax for compliance repairs.Then early in March it was reported leaking and a large Coast Guard operation involving three aircraft and two ships, ensured its safe arrival in Port aux Basques for repairs.
Early in 2006 the ship was detained in South Africa after protest activities against Japanese whaling in the South Pacific. In June it slipped out of Cape Town, claiming yacht status under the Canadian flag, and thus not needing to comply with regulations relating to commercial ships.  It was later reported in Melbourne awaiting the 2007 Antarctic whaling season.
By May 2008 it was back off Newfoundland where it was charged with interfering in the seal hunt and intentionally bumping CCGS Des Groseillers. The ship was seized in Sydney and auctioned off. Buyers were Green Ship LLC of Oregon, which planned to use the ship to monitor and clean up pollution in the mid-Pacific. The ship was towed to Halifax in late 2009 then on the Lunenburg in March 2010.
Still bearing the name Farley Mowat, the ship has languished at a dock there ever since. In March 2011 the Waterfront Development Corp commenced an action against the ship for payment of berthing fees.On January 15, 2013 the Federal Court ordered the ship  to be sold by tender. Bids are requested by  February 27, 2013. 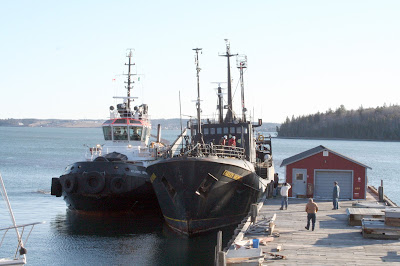 3. Arriving in Lunenburg with Atlantic Fir.

The Sea Shepherd groups have had many runs ins with authorities and have lost several ships over the years,  through scuttling, arrest or collision. Three of those have visited Halifax.
First was Sea Shepherd II. Built in 1962 as the trawler St.Giles it replaced the original Sea Shepherd, that was scuttled off Leixoes, Portugal in 1979 after ramming a whale catcher. The Sea Shepherd II was in Canadian waters in 1982 and 1983 to protest sealing, and was seized in March 1983 off Chéticamp, NS and all 17 crew arrested (they were tear gassed after walking to shore over ice.) The ship itself was held in Halifax until 1985 when it was released. It was eventually broken up in Esquimalt, BC in 2004.
Another Sea Shepherd ship, was the former CCGS Thomas Carleton, which became the Sea Shepherd's Cleveland Amory in 1993. It made one very brief foray to the Grand Banks where it cut a Cuban vessels trawl lines, but then suffered a main engine failure and was towed to St.John's. It was also seized and sold and eventually reached the Caribbean, where it has likely been scrapped. 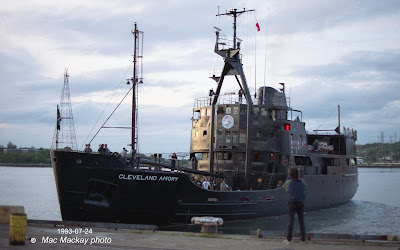