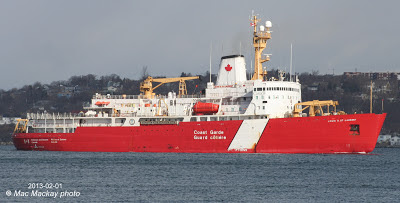 The Harper government took a break today from its usual press releases regarding the War of 1812 (isn't it over yet?) by announcing some preliminary contracts for the Joint Support Ships, fisheries research vessels and the new icebreaker to be named CCGS John G. Diefenbaker. The statement released in Vancouver, is short on detail, but amounts to $15.7mn for somebody. Since the construction work will take place on the West coast, that is why the announcement was made there, but if it is design work, we're not sure where it will actually be done.
The announcement including the startling statement that delivery of CCGS John G. Diefenbaker will coincide with the decommissioning of CCGS Louis S. St-Laurent, skilfully avoids saying when that will be. It was supposed to be in 2017, but it looks like it may be farther off than that if they are unwilling to give a date in a press release.
Speaking of the Louis, word reaches me that she may now be out of service for a time due a puncture in her bow. This was apparently acquired while assisting the broken down cargo ship Maple Lea somewhere north of PEI.
The ship was outbound from Summerside, PE when it lost all power February 17 and began to drift. The tugs Atlantic Beech and Spanish Mist managed to take the ship in tow, but somehow Louis S. St-Laurent and Maple Lea came into contact resulting in  holes in the ship's stern and Louis's bow.
The whole bunch arrived safely in Sydney last night where the fallout is now beginning to rain down.
It is difficult to get direct news on this story, but it would appear that yet again we have a Canadian government ship with a hole in it in Sydney.
The Louis certainly has battle scars, including that long crease in her starboard side near the stern, that has been there for many years - I've never heard how she got that one, but she will certainly have some downtime after this latest incident, and just when she is badly needed for Gulf ice work. 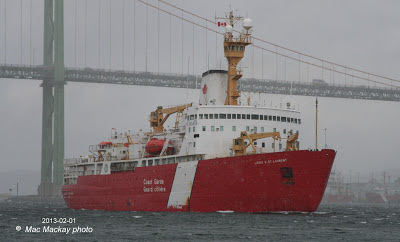 It was also revealed today that Halifax Shipyard will be allowed to bid on major refits of CCGS Earl Grey, Edward Cornwallis and  Sir William Alexander. It was originally thought that being awarded the big contract would make the yard ineligible for work on smaller ships. Is this a subtle way of telling Irving that maybe the contract isn't going to be as full as it once was?
Since all information on the shipbuilding contracts is now being released by the government only, and both ISI and Seaspan are under strict gag orders, only time will tell.
Posted by Mac at 10:12 PM