The CMA CGM Columbus loop service is largely responsible for the large spike in container traffic through Halifax in the last year according to latest figures. (ACL has also increased cargo through Halifax, but some of Zim's business has been captured by CMA CGM.)

The CMA CGM weekly service started up in earnest October 4, 2015 (although there were three trial runs iu August and September) and since then we have seen a steady stream of big ships.

Today's arrival is the second for CMA CGM Tage. When it called here May 28, it was the first large split superstructure container ship to call in Halifax. These larger ships feature engines closer to midships and separate bridge structure mounted further forward to comply with visibility requirements over the bow.
It was also the largest container ship to call in Halifax, at 9,365 TEU. Built in 2015 by Dalian Shipbuilding Industry Co in China, the ship measures 95,263 grt. Its deadweight tonnage has been quoted as 113,800 or 112,500 by different sources.

Although well short of the giant container ships of the world, it is nevertheless too large to pass under the harbour bridges and can only be accommodated at the Halterm container terminal.

The two terminal managers in Halifax are expected to merge soon and that will see a shift of shipping lines, with those using smaller ships moving to Fairview Cove, and Halterm catering to larger ships. It seems inevitable that larger and larger ships will keep coming, and the 10,000 TEU threshold will likely be cleared someday soon.

Among the smaller ships that may shift to Fairvew are those serving Melfi Lines and their Europe / Cuba service. With CMA CGM Tage due to arrive at pier 41 and Maersk Pembroke at pier 42, Henriette Schulte tied up at pier 36. 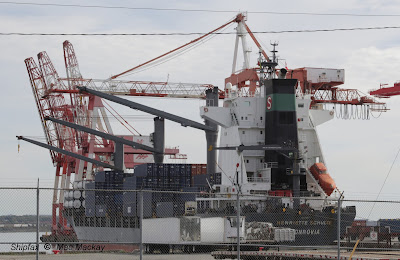 At pier 36 the ship is served by one crane. The three in the backgound have been decommissioned and are no longer in service.
This is the second voyage for the ship since joining Melfi. It was built in 1997 in Poland by Szczinska for Schulte Group of Germany. It has been renamed several times for charters as CSAV Brasilia 1997-98, Fesco Voyager 2000-02, P+O Nedlloyd Lome 2002-2003 and Cap Rojo 2004-08, reverting to its orginal and current name some of the intervening periods. With a capacity of 1684 TEU (including 120 reefers) the 16,281 grt, 22,352 dwt ship has three 45 tonne cranes. 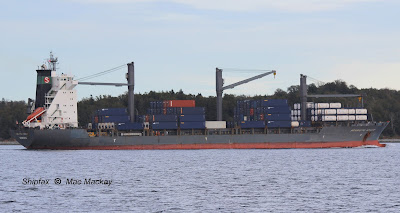 En route to Cuba the ship carries a number of tank containers forward. One of Cuba's largest exports is rum, but they could be used for other sugar based liquids.
.