Now that the St.Lawrence Seaway is closed for the winter Compass Logistics International (CLI) will once again be calling in Halifax for a few months, with their ship CLI Pride. (In December the ship unloaded at Valleyfield, QC and Johnstown, ON.) 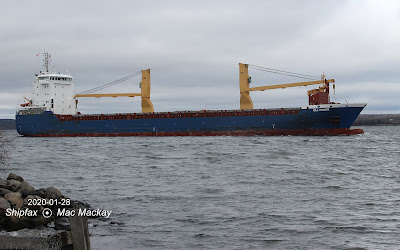 As I have observed before, it is among the smallest ships to maintain a regular transatlantic schedule year round. However as a specialized carrier, it has a built-in demand for service. Compass Logistics and its Canadian partner company RSB Logistic Inc specialize in transporting nuclear materials. They have their own dedicated truck fleet also, based in Saskatoon.

The ship was built in 2011 as Brielle by Dongfang Shipbuilding Group in Yueqing, China. Measuring 7138 gt and 7950 dwt, it carries a pair of 30 tonne cranes.

Its primary cargo is uranium hexafloride, which has been handled in Halifax for many years, previously by Briese and before that by Atlantic RoRo. 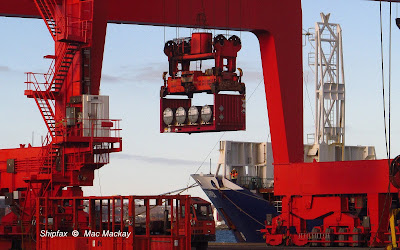