The Lunenburg-built former Banks schooner Sherman Zwicker is in for a major refit / rebuild at Mystic, CT. Built in 1942 by Smith and Rhuland it fished until 1968. 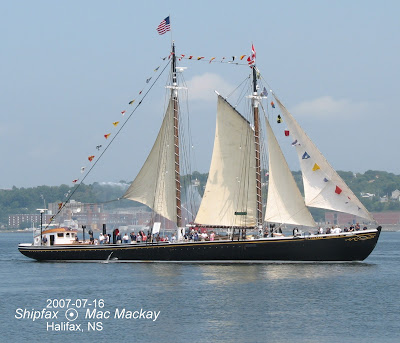 Saved and maintained by a series of US owners, it now operates as an oyster bar in Manhattan (!), which it will continue to do in the summers but will return to Mystic each winter for several years as the rebuild continues.

When last seen here in a Tall Ships event in 2007, the schooner had kept its original appearance ( bald headed = no topsails; knock about= no bowsprit) including the typical wheelhouse of the auxiliary schooners. The engine occupies what was the main cabin aft. Let's hope no one tries to "improve" on this classic appearance, and concentrates instead on taking the hog out of the hull and replacing deteriorated components.

This was never a racing schooner like the Bluenose but a hard working money maker fishing the Grand Banks from dories. and that is how it should be maintained - oysters aside.