There was another pair of sister vessels that met up in Halifax from time to time. Built for Canadian owners in the 1950s they were built to the dimensions of the old St.Lawrence canals. After the Seaway opened they were lengthened and deepened and lasted into the 1990s, still paired. 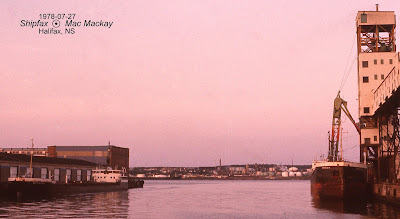 On a summer evening in 1978  Franquelin unloads at the pier 26 grain leg and sister ship New York News waits its turn across the camber at pier 23.

At the time both ships were owned by Quebec+Ontario Transportation Ltd. Founded in 1914 to transport pulpwood and newsprint, the company was a child of the Chicago Tribune and New York News newspaper organizations. The parent company owned vast timber rights in Quebec and Ontario and paper mills in Baie-Comeau, QC and Thorold, ON. When not supporting company operations the ships carried a huge variety of bulk commodities, including grain. Due their size the ships could access many small ports.

Franquelin was named for the area of large timber reserves owned by the Tribune and the loading port on the North Shore of the St.Lawrence River. Pulpwood was shipped from the port for processing in Thorold until the 1973 season. 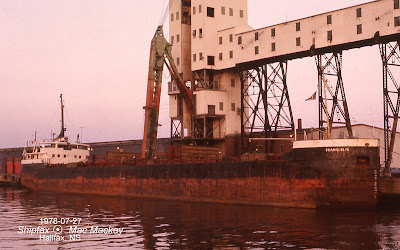 Before the advent of self-unloaders, grain was unloaded by means of the grain leg (which still exists). Essentially a loop chain of buckets, the leg could be lowered into the hold of a ship. However the ship had to be moved for unloading each hold .

Starting life as Griffon in 1955 at Port Weller, the ship was also lengthened and deepened in 1959-1960. Joining Q+O in 1967 it was the second ship of the name in the Q+O fleet. It was renamed Eva Desgagnés when the company was wound up in 1987.

In 1990 new Mexican owners gave it this name Telchac, but it only lasted for a short time in their service. It was reported en route to Tuxpan for scrap in 1992. 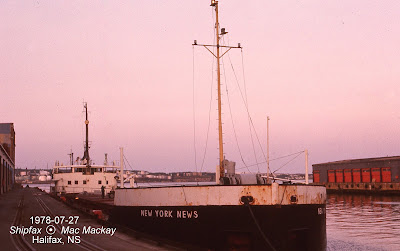 Among the smaller ports the ship could serve was Pugwash, NS, where it loaded salt. While there on July 18, 1967 improper loading resulted in the ship breaking its back. The two halves were towed to Halifax and re-assembled, and the ship went back to work. In 1983 Q+O sold its eight ship fleet to Transport Desgagnés. Renamed Stella Desgagnés, the ship continued to bring grain to Halifax until sold again in 1993. 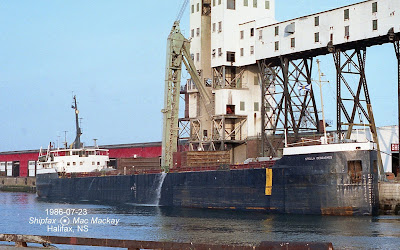 Crews wash down the Stella Desgagnés' deck as it unloads at the grain leg on another July evening, eight years later.

Renamed Beam Beginner and reflagged to Panama for new owners, the ship was damaged in ice in December 1993 and never left Canadian waters. It was resold to Thunder Bay, ON owners, renamed Wolf River and laid up in Thunder Bay.