It was bumper to bumper traffic at PSA Halifax today with a 10,000 TEU ship at pier 41-42 and another ship anchored waiting its turn.

APL Dublin was built in 2012 by Daewoo Shipbuilding and Marine Engineering, Okpo. The 128,929gt, 131,204 dwt ship has a capacity of 10,960 TEU and has only recently joined the Columbus JAX service. Its normal arrival day would have been Saturday, but likely delayed its arrival due to weather. 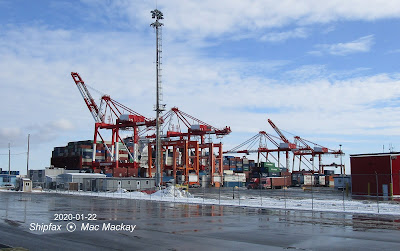 Two cranes are in the up position but APL Dublin takes up most of the berth space at PSA Halifax, pier 41 and part of pier 42.

Until the pier 42 extension is completed and the new crane arrives later in the year, only one large ship and one small ship can be accommodated at Pier C.

Zim Tarragona is a medium sized ship, and so had to anchor until APL Dublin sailed.