I began taking photos around Halifax harbor very soon after moving here in 1966. It was not until 1969 that I began to take pictures using 35mm film. By 1970 I was "on a roll" so to speak and on hand to document the birth of container shipping and the slow death of break bulk in the port. In this new feature I will mark another decade by showing some photos taken in 1970 and before. 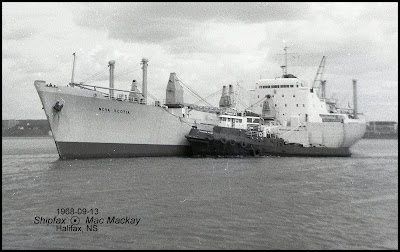 Nova Scotia arriving off pier 23 with the assistance of the tug Foundation Valiant.
(Built in 1963, the tug was renamed Point Valiant in 1973 and André-H. in 1995, and is currently owned by Groupe Océan, but has been in cold layup for several years in Quebec City.)

Although they did manage to hang on for a few more years, the writing was on the wall for Furness Withy's handsome pair of ships, Newfoundland and Nova Scotia. The third pair of ships to carry the names, they were built in 1964 and 1965 respectively, for the Liverpool / St.John's / Halifax / Boston  (and return) liner service, replacing the 1947 pair, which in turn had replaced the 1926 pair (both lost in World War II). Since the ships carried mail they were entitled to use "RMS" [Royal Mail Ship] before their names. At that time "surface" mail traveled much more cheaply than air mail and the bulk of transatlantic mail went by ship. The ships no longer carried passengers as their predecessors did.

Among the many good looking ships built by Burntisland Shipbuilding, they measured 6,600 grt in closed shelter deck configuration, and 7,500 dwt. Their holds were served by one 15 ton, one 10 ton and four 5 ton derricks and four 5 ton cranes. The 6 cylinder, 7150 bhp B+W main engine (built under license by Harland and Wolff) gave a speed of 16 knots. Also fitted to carry some refrigerated cargo (like Nov a Scotia apples) and vegetable oil, they were rated as Ice Class 3.

Newfoundland was renamed Cufic in 1973 then re-renamed Newfoundland in 1974 when it was transferred to Johnson Warren Lines Ltd (Furness Withy remained as managers).  They renamed it Cufic again in 1976, but sold it off in 1977. Renamed Gaiety by Golden City Maritime, under Panama flag, it was broken up in Shanghai in 1986. 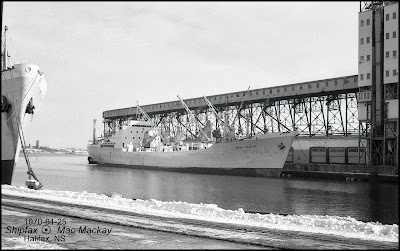 Nova Scotia became Johnston Warren's Tropic in 1973. After a 1978 sale to China fell through it was sold to Booker Line and became their Booker Valiant running between Liverpool and the Caribbean. The Shipping Corp of Saudi Arabia bought the ship in 1980 renaming it Arab Dabbor and then Arab Hind in 1986. It lasted until 1998 when it was scrapped in Alang.

Newfoundland and Nova Scotia together in Halifax for the first time. Winter weather apparently delayed one of the ships on its return leg.

Furness Withy, a giant in British shipping, eventually morphed into Orient Overseas Container Line (OOCL), which was taken over by China Ocean (COSCO) in 2017.