Where the action is.

After mentioning Atlantic RoRo Carriers as recently as January 28 - {qv} I was more than a little surprised to see one of their ships show up in Halifax yesterday and today. Now branding themselves as ARRC Line they still run a monthly container service between St. Petersburg, Russia and the US east coast. Calling in such ports as Baltimore, Philadelphia, New Orleans and Houston (on demand) they no longer show Halifax on their schedules. European ports also include Bilbao, Southampton and Antwerp - again on demand.

In a previous post on the line I outlined their use of the famous Astrakhan type ConRo ships:
http://shipfax.blogspot.com/2015/01/astrakhan-loros.html. With the retirement of the last of those ships, the line has simplified its operating name to ARRC Line. It still offers RoRo, but must use the services of other lines since none of the three current ships are RoRos.

Atlantic Action II arrived at pier 42 (PSA Halifax) last night, and after only a brief time alongside, moved to anchor. It then sailed mid day today. 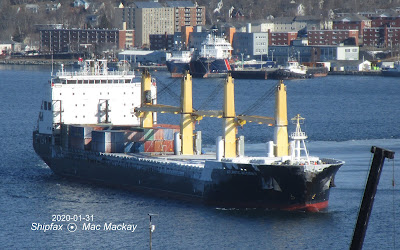 The ship appears to be a conventional open hatch type general cargo/bulk carrier with portable pontoon type tween decks, and not a cellular container ship at all.  Built in 2010 by Zhejiang Ouhua Shipbuilding Co in Zhoushan it measures 22,863 gt, 33,227 dwt and carries four cargo cranes. It carried the name Warnow Sun until 2018.

If the ship unloaded any containers in Halifax they must have been on top of the deck load because the frozen spray has not been  disturbed on any of the hatch covers. 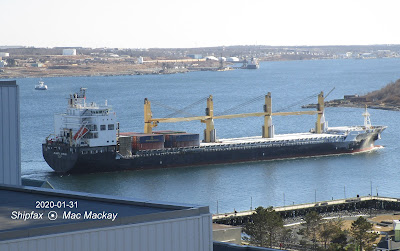