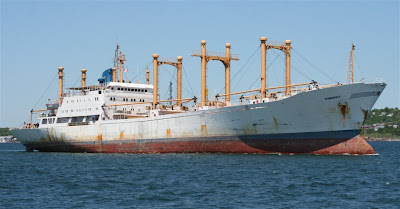 It was a much busier day in Halifax today, with all tugs working early in the morning to dock the autocarrier MAERSK WAVE and the containerships ZIM MEDITERRANEAN, REYKJAFOSS, STADT BERLIN and STUTTGART EXPRESS.
At noon time they were back at it with OOCL SAN FRANCISCO and STADT BERLIN asrriving amd REYKJAFOSS leaving.
It will be a repeat in reverse at 4pm as they all begin to leave!
The herring seiners are back in, but without any catch to show for their last few days.
And a treat for all is the return of BLUENOSE II for harbour tours. Due to re-construction at the Maritime Museum dock she has shifted to Bishop's Landing.
Early this afternoon the old reefer ship CHERRY (see previous posting) moved fom the Scotiadock II floating drydock to pier 26-27 as a "dead ship" with SVITZER BEDFORD and POINT CHEBUCTO providing the power. You will note in the photo that she has no anchors! These were presumably removed when she was towed from Bayside. Her anchor chains were used as a towing bridle and the anchors were likely stowed on deck.
Posted by Mac at 2:30 PM