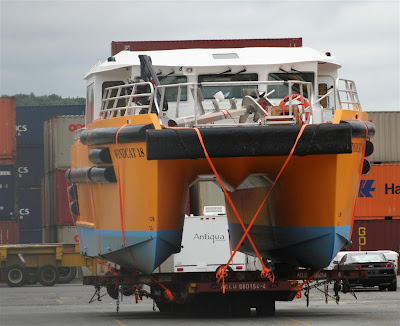 A Nova Scotia shipbuilding success story is the aptly named Windcat series of catamaran workboats. Built by Theriault's in Meteghan River, these boats are built to service wind farms offshore Europe. So far 18 boats have been built in this series. They feature a square bow that allows them to moor at offshore wind farms so that tehnicians can service the towers from access doors near the base. On her foredeck she has an articulated crane, and her mast, which has been stowed for shipping.
The boats travel on their own hulls to Halifax, where they are craned ashore and mounted on a trailer, which in turn is wheeled aboard ships of the Atlantic Container Line.
Windcat has its own website -worth a look. www.windcatworkboats.com
Posted by Mac at 9:28 PM