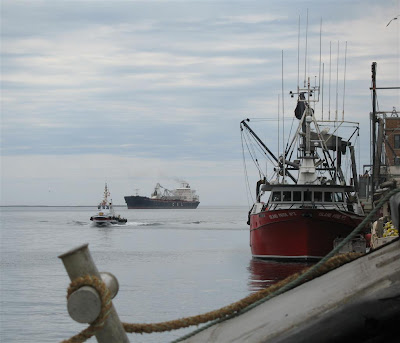 The self-unloading bulk carrier SHEILA ANN arrived for bunkers at noon time. The ship was built in 1999 at Jiangnan Shipyard in Shanghai, China for the CSL Group. It can carry 70,000 tonnes of cargo and can unload at a rate of up to 5,000 tones per hour depending on the type of cargo. It usually carries coal to Point Tupper or Sydney and stone from Cape Porcupine to the US. It can also carry gypsum, phosphate rock and similar bulk cargoes.
The ship was named for the Sheila Ann Martin, whose husband was, for a time, Prime Minister of Canada, and was the owner of the CSL (Canada Steamship Lines) group of companies. Her sons now own CSL.
The pilot boat APA No.1 is shown in the mid-ground, with some of the herring seiner fleet in the foreground.
Posted by Mac at 12:51 PM