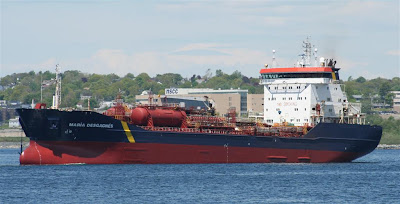 The tanker MARIA DESGAGNES got underway this afternoon for Come-by-Chance, Newfoundland, after a lengthy layup in Halifax. The ship arrived in March and spent some time in drydock, but has been idle ever since.
Her owners, Transport Desgagnes of Quebec (and their tanker subsidiary PetroNav), have had several of their tankers laid up during this time.
There is some speculation that MARIA DESGAGNES will be working overseas and flying a flag of convenience. Several other Desgagnes ships do this seasonally, and return to Canadian flag for summer work in the arctic, then head overseas again for the rest of the year. Their tanker fleet however have always remained Canadian flagged year round.
A drop in demand for Canadian flag tankers, an increase in the number of Canadian tankers available (Algoma bought two tankers this year alone, and Desgagnes bought one) and Ultramar's use of a tug and barge on the St.Lawrence River, all lead to this situation.
Fleet mates VEGA DESGAGNES and PETROLIA DESGAGNES remain laid up in Montreal and Quebec City respectively. THALASSA DESGAGNES was laid up until May 31 but has resumed service for a trip to the US with asphalt. SARAH DESGAGNES is trading in the Caribbean.
The three Rigel tankers, formerly chartered by Desgagnes, but purchased outright early this year, DIAMOND STAR, EMERALD STAR and JADE STAR are all still operating for Ultramar.
Posted by Mac at 2:23 PM