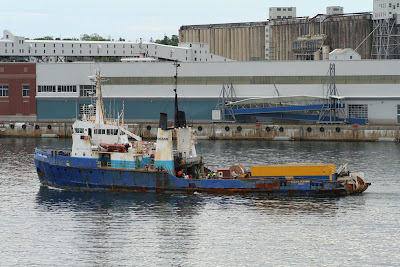 The supply boat OCEAN FOXTROT is shown leaving Halifax Sunday afternoon. She is shown passing west of George's Island, and photographed from George's Island, a unique angle for me!
OCEAN FOXTROT is fitted with cable laying and splicing apparatus, which will be used on the Deep Panuke project off Sable Island.
In the middleground of the photo is the "Seawall" piers 20 to 22, with one of the port's cruise ship gangways, with its awning and blue tarped railing. The gangway is on wheels to move with the tide and is adjusted to suit the particular ship.
In the background the grain elevator dominates the skyline.
Posted by Mac at 11:15 AM