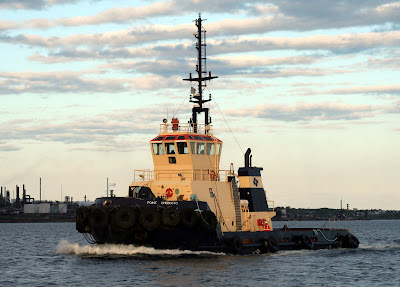 With two tug companies in Halifax, operating a total of four tugs, one would be forgiven for thinking that they never seem to be doing anything! Well times are tough for the tugs. There is certainly less work for them, but there are still opportunities.
POINT HALIFAX recently went to Bayside, New Brunswick to dock the ship CHERRY, and SVITZER BEDFORD later went to Bayside and towed the ship to Halifax.
POINT HALIFAX went on to Bull Arm, Newfoundland helping with a float off from a submersible ship. She is expected to go to Quebec to start her summer's work running to the arctic. SVITZER BEDFORD then may go to Bull Arm to relieve POINT HALIFAX.
Meanwhile POINT CHEBUCTO has been doing a lot of the harbour work. Here she is returning to dock at sunset Monday evening after unberthing the container ship SAUDI DIRIYAH.
Posted by Mac at 9:55 PM