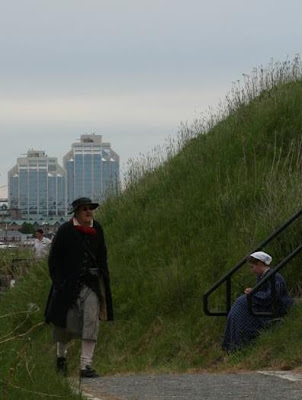 The Halifax newspaper announced today that George's Island will be open to the public starting in March 2010. This is great news for ship watchers (and others too I am sure.)
A mentioned below, I visited the island on June 14 and was impressed by the views.
The incongruous sight of period customed people with modern office buildings in the background was priceless.
Much work is needed to make George's ready for visitors, including a water line to run from the mainland, a sewage system, a dock and safety measures to prevent falls.
George's Island is also famous for having more snakes per square foot than anywhere in Nova Scotia. This may or may not raise the island's appeal for visitors, but the snakes are garter snakes and are considered harmless.
Posted by Mac at 2:42 PM