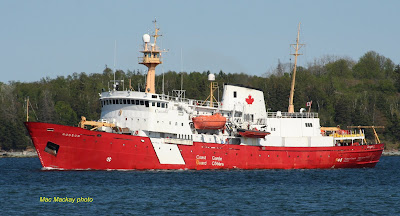 On this day in 1969 CSS Hudson (Canadian Survey Ship) set out from Halifax on a record breaking scientific cruise. The ship circumnavigated the Americas, by sailing south in the Atlantic, around Cape Horn, north in the Pacific to the Bering Sea and through the Northwest Passage, back to Halifax. Along the way scientists carried out numerous studies, recorded reams of data and did pioneering work in many fields.
The trip took 11 months, and when the ship returned to Halifax on October 16, 1970 she had achieved many firsts and at least one notable second.
On the southward trip she carried out oceanographic stations from the equator on the 30 degrees west longitude line as far as 55 degrees south. She retraced the Beagle Passage, only the second ship to do so since Darwin's voyage 132 years before. She measured current flows in the Drake Passage for the first time. She was the first, and only ship ever to sail the longest possible straight line at sea, on the 130 degree west longitudinal line from 55 degrees south to the Gulf of Alaska, performing oceanographic stations every 2 1/2 degrees.
Her pioneering surveys of the Pacific Plate off Vancouver Island added considerable knowledge to the then infant science of plate tectonics.
Her surveys of the southern Beaufort Sea recorded sea bed scours made by ice, which proved to be a revolutionary discovery.
In company with CSS Baffin, she was only the 6th ship to complete a Northwest Passage (Baffin was circumnavigating North America on this trip.) They were beset by ice in the Prince of Wales Strait and were broken out by CCGS John A. Macdonald, and escorted through Viscount Melville Sound to Baffin Bay. From their studies they determined that Baffin Bay was really an ocean.
After passing to the east of Newfoundland (so that they could truly say they circumnavigated the Americas) they arrived safely at the Bedford Institute of Oceanography, the ship's home base.
Hudson has since become CCGS Hudson (Canadian Coast Guard Ship) through government reorganisations, but is still Canada's premier ocean research vessel. Built in 1963, she is still going strong, although her trips are now much shorter.
In the photo above she is shown returning to Halifax July 14, 2008.
Posted by Mac at 10:42 PM