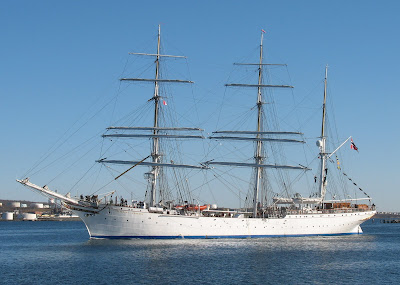 The Norwegian naval training vessel Statsraad Lehmkuhl arrived today for a visit. The tall ship is on her way back to Norway, and will tie up at the Cable Wharf (Murphy's) for a few days. Unfortunately she did not sail into port.
Built in 1914 as Grossherzog Friedriech August, as a German training ship, she was taken over by Britain following World War I. In 1921 she was purchased by Norway and given her present name (which means cabinet minster Lehmkuhl, after her sponsor.)
During World War II, when Germany captured Norway, she was renamed Westerwarts for a time, but reverted to her present name after the war. She is currently owned by a foundation and used for various tall ships programs, including the Royal Norwegian Navy's officer training.
The photo above was taken on her first pass. She then made a 360 degree turn around George's Island and came back up the harbour, much closer to the shore, and with her yard arms manned (or personned) for a more formal arrival.
Posted by Mac at 1:14 PM