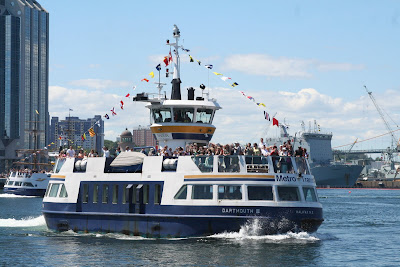 Metro Transit, the transit authority for the Halifax Regional Muncipality has recommended to HRM council the addition of two new ferries to the Halifax-Dartmouth route. This would allow expanded hours for the Woodside ferry route, which now only operates during commuter hours.
Having a spare ferry would presumably allow repairs and upgrades to the 1978 vintage Halifax III and Dartmouth III. Halifax III has just returned to service after a lengthy refit, which, according to press reports was mandated by Transport Canada. The third ferry, Woodside I is somewhat newer, built in 1986.
With five ferries, it should be possible to schedule serious upgrades without disrputing service and to bring the original trio up to modern standards.
The new third Seabus, which has just gone into service in Vancouver in preparation for added traffic during the Olympics, was supposed to provide this benefit also. However it now transpires that one of the orginal two vessels will be laid up after the Olympics, due to lack of funds, and will not be rebuilt.
Therefore some caution should be expressed in Halifax, where two new ferries may mean retirement of two old ones and no improvements in regular service.
While the current ferry docks imply a certain bow form for new ferries there is still some lattitude in the rest of the design to allow for speedier loading and unloading of passengers. Unfortunately the double sided Vancouver Seabus would not work in Halifax due to the design of the terminals with a common ramp.
Spending money on new ferries for the Halifax-Dartmouth and Halifax-Woodside routes makes much better sense than the various proposals for high speed craft running to the Bedford Basin.
The photo shows Dartmouth III decked out for the Tall Ships Parade of Sail in July, with Woodside I in the background. The three identical ferries were built by the now defunct Ferguson Industries shipyard in Pictou. They are fitted with Voith Schneider propulsors, fitted forward and aft, allowing them to sail in either direction and to move sideways as required, into their docks.
Another word of caution - the transit authority's master plan called for the two new ferries to be in service by 2012. In view of the shortage of shipyard space and late delivery of some recent vessels, that does not leave much time for a decision.
For more information on Metro Transit see the excellent Wikipedia entry.
Posted by Mac at 2:04 PM