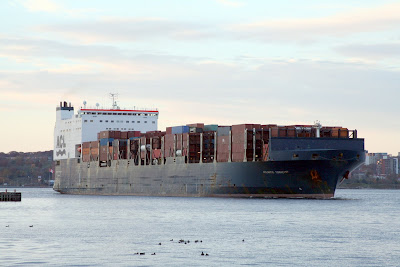 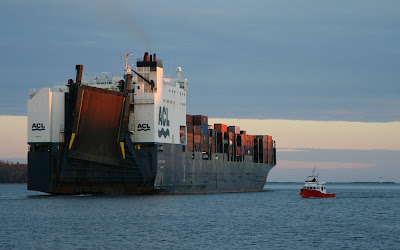 The change back to Standard Time is much later in the year now (thanks Mr. Bush), but even so, it means a change in photography habits. Late afternoon photos become a lot more dodgy, so these shots of Atlantic Conveyor may be the last for a while. Sunday afternoon ship departures are generally at 4pm or later and it will soon enough be dark by then.

Atlantic Conveyor is one of five ships operated by Atlantic Container Lines on a constant transatlantic shuttle. We usually have two of these ships a week, one westbound and one eastbound.

Atlantic Conveyor was built by Swan Hunter on the Tyne and launched July 12, 1984. She arrived in Halifax on her maiden voyage February 1, 1985, and was lengthened in 1987. They are the largest ships of their class in the world, but they are getting quite old. There has been talk of replacements, but the Grimaldi Group (current owners of ACL) have been quiet about that recently.
Posted by Mac at 7:53 PM