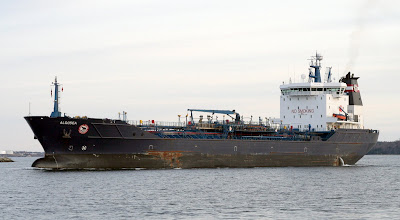 Algoma Corporation of Sault Ste. Marie, Ontario became a major player in the domestic tanker business, when it took over the coastal fleet of Imperial Oil in 1998. Since then they have replaced most of the aging fleet with newer vessesl. One of the first they acquired was Algosea, ex Aggersborg -05, 11290/98. Built by the Alabama Shipyard to a European design, the tanker worked for the important Danish firm Dannebrog. When purchsed by Algoma in 2005, she was brought under Canadian registry and modified for use on the Great Lakes. A sister ship, Amelienborg also joined the Algoma fleet but trades internationally.
Algosea is shown here passing pier 20 on November 13, bound for pier 9 where she will layover for a few days. She would normally have berthed in the deep water piers, but was displaced by the big tanker Mattea (see above.)
Posted by Mac at 7:14 PM