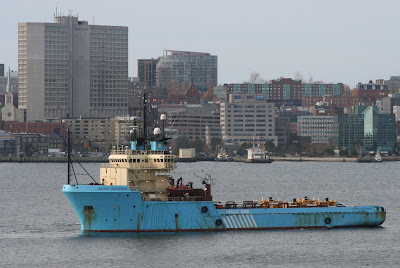 The giant Danish AP Moller Maersk company is best known as owners of the largest fleet of container ships in the world. They are also a major player in the offshore oil construction and supply business. Their Canadian arm, Maersk Supply Canada is based in St.John's, and has an extensive fleet there.
One of their Canadian ships is Maersk Challenger, built in 1986 in Denmark. She has been in Halifax for the last few weeks supporting the rig Rowan Gorilla III while it is spudded down in the harbour. Maersk Challenger runs back and forth from the Exxon Mobil dock in Woodside to the rig with such stores as fuel, water and supplies. The trip is so short, she just backs away from the dock and backs out to the rig in number 6 anchorage. That is what she is doing in this photo taken November 14.
The launch/tug Halmar also stands by when the Challenger is doing her work.
Posted by Mac at 7:53 PM