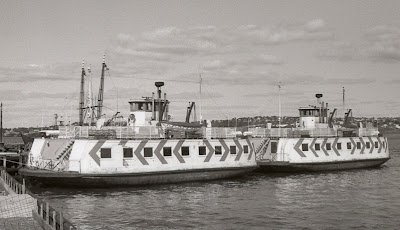 From 1956 to Sunday September 9, 1979, these two ferries plied the route between Halifax and Dartmouth. They replaced car ferries when the Angus L. Macdonald bridge opened for traffic, joining the two sides of Halifax harbour for vehicles, including trolley busses.
These wooden hulled sisters were built by the Smith & Rhuland yard in Lunenburg. The only similarlity they had to their illustrious yard-mate, the schooner Bluenose, was their designer, William Roue.
The chevron/arrow head designs were added not long before their retirement, and were intended to give a trendy look to the aging boats. The designs did not do much for their well worn interiors (two cabins - one for smokers and one for non-smokers) featured linoleum deckcovering and varnished slat benches, resembling church pews in appearance and comfort, and wood panelling.
The delightfully grubby ferry terminals, built in ancient times, were also replaced in 1979 when new ferries came into service.
It is hard to believe that these vessels only served for twenty-three years whereas the current boats have been in service for thirty.
The boats are shown laid up on September 23, 1979.
Posted by Mac at 9:46 PM