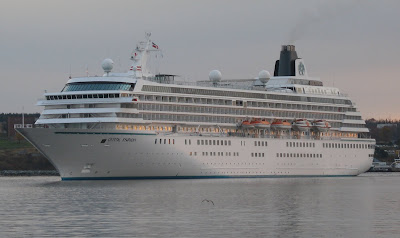 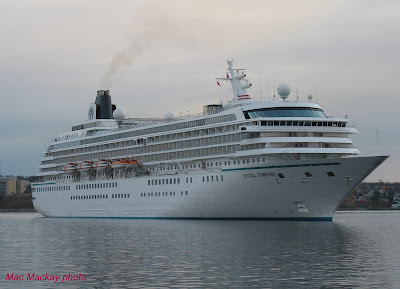 The last cruise ship for the season pulled in this morning. Crystal Symphony at 51044 gross tons, carries 992 passengers, but very few were visible on deck at 0730 hrs. Although the ship was built in 1995 it has received two major upgrades, including a $25 million do-over from September 17 to October 1 in Boston.

Consistently scoring as the best large cruise line in the world, Crystal is not afraid to spend big money on this "six star" vessel which features more than 60 butler served penthouse cabins and suites. This ship has been #2 in the list of best cruise ships in the world for two years running (her sister Crystal Serenity has been first.) It also scored a perfect 100 in a recent Centres for Disease Control inspection.

When she sails this afternoon that will be it for the 2009 cruise season in Halifax. Final figures are not in, but it seems that the year met expectations despite the economy.
Posted by Mac at 10:17 AM