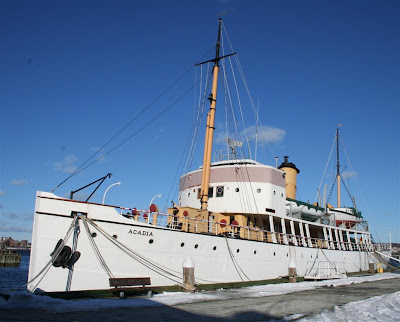 Acadia, pride of the Maritime Museum of the Atlantic, will be leaving her customary berth for a spell in drydock. The vintage former survey vessel was last in drydock in November 2003. She is scheduled to return to the Scotiadock floating drydock at Halifax Shipyard on Monday January 25 for hull work, which will keep her safely afloat for some years to come.
Built in 1913 at Swan Hunter & Wigham Richardson at Newcastle-upon-Tyne (hull number 912), she first arrived in Canada July 8, 1913 and on the 29th of the same month sailed for Hudson Bay. She did survey work for the Port of York factory (which was eventually abandoned) and Churchill (which was built). She served in both world wars (the only surviving Canadian ship do do so) and had a distinguished career as hydrographic survey vessel (hence the initials CSS=Canadian Survey Ship) until November 28, 1969, when she was retired.
Acadia was reprieved from the scrapyard when ownership was transferred to the Maritime Museum of the Atlantic, and was opened to the public in 1982.
Originally based in Pictou, Nova Scotia, she was transferred to Halifax when the Bedford Institute of Oceanography opened in the 1950s. However she spent most of the survey season elsewhere on Canada's coasts, particularly in the north and off Newfoundland
There is a lot more to be learned about the Acadia by visiting her at the museum during the summer, when she is open to the public, and at the museum's website.
http://museum.gov.ns.ca/mma/atoz/acadia.html
Posted by Mac at 5:36 PM