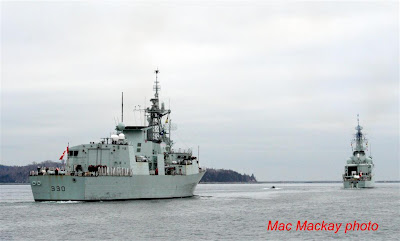 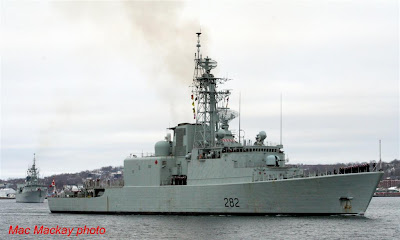 Two Halifax warships set out for Haiti this afternoon as part of a relief mission. The Caribbean country, with many ties to Canada, suffered a devastating earthquake yesterday and the two ships were scrambled to lend assistance. The frigate Halifax was reportedly 200 miles out at sea when she was called back, and the destroyer Athabaskan was carrying out gunnery exercises off Halifax.
Halifax tied up yesterday afternoon alongside Protecteur, where aid was already being stockpiled. Athabaskan had to go to the Bedford magazine to de-store ammunition, and arrived in the Dockyard late this morning.
The ships sailed promptly at 3pm to rendez-vous with their Sea King helicopters in the Middle Ground area between Ives Knoll and Meagher's Beach.
Athabaskan is lead ship, with Halifax following in the photo above.
It was an interesting experience to watch the ships leave port. Athabaskan made no audible sound, despite the fact that her engines were obviously working hard. There was no engine noise from Halifax either, but as she accelerated extremely quickly the rush of water past her hull was quite loud, and she left a wake of two to three feet.
The ships are due in Haiti in five days or so.
The United States navy will also have a significant presence in Haiti. The aircraft carrier Carl Vinson was diverted to Haiti and the hospital ship Comfort and numerous other vessels will be providing immediate assistance.
Posted by Mac at 3:44 PM