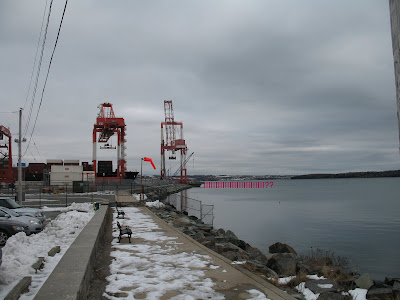 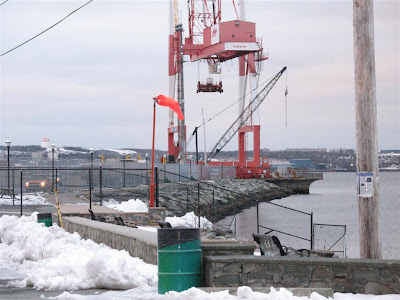 Work will soon start on the extension to pier 42. The Halterm container terminal will be extended southward (to the right in the picture) to allow two large ships to berth at the same time.
On Tuesday evening Beaver Marine's tug Mister Joe and the scow Beaver Kay arrived and on Wednesday morning they offloaded a crawler crane, a pile driver and several other pieces of equipment to begin the work.
The crane is visible in the photo, which I fear may be the closest we may be able to get to the best shipspotting, ship photographing spot on the waterfront until construction is completed.The extension will be quite wide, allowing for the extension of the container crane rails and a landing area for the boxes and room for trucks to turn. We live in hope that the Port Authority will include a viewing area at the end of the pier, as there is now.
Frequent progress reports will be posted here.

Background:
Last fall the Port Authority indicated that the pier would be extended 85 meters to the south (seaward) so that two post-Panamax ships could be berthed simultaneously. The extension would be 45 meters wide, allowing for crane rails and pick-up/drop off zone. The extension will be built using sheet piles (the original pier and its previous extension were built of concrete caissons.)
See upper image taken January 8, with my impression of the size of the extension.
Posted by Mac at 10:33 PM