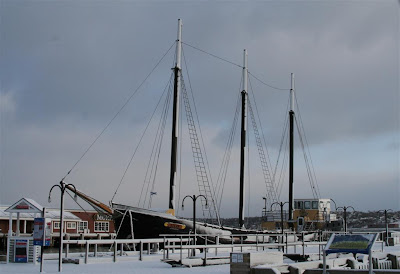 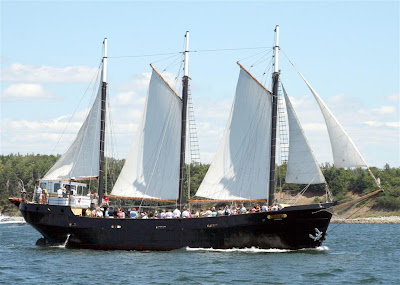 Tall Ship Silva (official name Silva of Halifax) patiently awaits spring at her berth at Queen's Wharf this morning (upper photo). She offers harbour tours under sail during summer months and has become well known and well liked by her patrons.
Built in 1939 by Karlstads Mek.Verk. in Karlstad, Sweden, as 3 masted auxiliary schooner, she was built to operate on the Iceland trade, which she did for a time. In the 1960s she was converted to a small bulk carrier, without sails.
In 2000 she was acquired by Canadian Sailing Expeditions Inc. They towed her to Halifax with their trawler Hawk, which they had purchased in England. Both were to be converted to sailing vessels. Hawk and Silva arrived July 8, 2001 and over the next year was rebuilt as a 3 masted schooner. Hull work was done at Brenton Gray Shipyard in Sambro, and rigging done alongside in Halifax.The company Tall Ship Silva Inc was formed to be her owner and she was briefly renamed Silva 1. However in 2002 she received her present name Silva of Halifax. This name is in the Swedish tradition where ships have their home port appended to their name. [In Swedish she would be "Silva af Halifax".]
It had been Canadian Sailing Expedition's plan to convert Hawk (later renamed Hawk I) to an ocean going tall ship, however the chance came to buy what became Caledonia. The unfortunate result of that project lead to the bankrupcty of Canadian Sailing Expeditions, and the pending sale of Caledonia. Hawk 1 was scrapped, I believe at Sheet Harbour.
In the meantime Silva rest patiently for a few more months when she will be sailing the waters of Halifax harbour once more.
In the lower photo she is shown in the Tall Ships Parade of Sail in July 2009.