The crude oil tanker Nordic Apollo arrived Wednesday and sailed again tonight after a brief visit to Imperial Oil. Nothing particularly remarkable about the ship- built in 2003 as Euro Spirit, renamed Glyfada Spirit in 2003, and Nordic Apollo in 2006. Measuring 81,310 gross tons and 159,988 deadweight. Owned by Nordic American Tanker Shipping of Bermuda, managed by Gemini Tankers LLC of Stamford, CT, and registered in the Marshall Islands.
However she is not the first Nordic Apollo to call in Halifax. The first was more remarkable!
She was built in 1980 by Avondale Shipyard in New Orleans as El Paso Cove Point. Rejected by her owners due to hull cracks (and a down turn in the economy.) Two of her sisters, El Paso Columbia and El Paso Savannah were laid up in Halifax for a time in an uncompleted state. 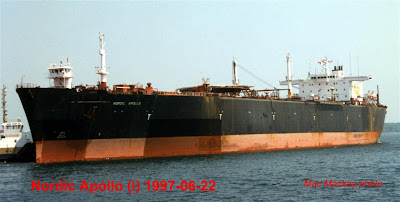 By 1983 she was renamed Jade Phoenix and converted to an oil/bulk carrier and converted to burn oil or coal. Then in 1991 she was converted to an oil storage tanker named Coastal Jade. She arrived in Halifax in April 1992 as Nordic Apollo, managed by Nordic American Tankers, and was stationed on the Panuke Oil field as a storage tanker. She stored oil and pumped it off from time to time to smaller shuttle tankers.
She was in and out of Halifax during the life of the Panuke oil field (the oil was exhausted and the field decommissioned- a lower deposit at the same site is now being developed for gas, and is called Deep Panuke.)
Her most notable visit was in the fall of 1993, during which time she was anchored in Bedford Basin for repairs. On November 6, 1993 She started to drag anchor in a storm and blew all the way across the Basin to the Dartmouth shore and ran aground. It took the combined efforts of the tugs Breton Sea, Terra Nova Sea, Point Halifax, Point Chebucto and Point Valiant to drag her off. She was not seriously damaged, but there was a huge salvage claim filed.
In 2006 she was renamed Apollo Spirit and is still working as a storage tanker. Last heard from she in the Central North Sea. She is currently listed as 89,421 gross tons. However because of her gas tanker ancestry, she has very much more freeboard than a typical crude oil tanker, so she looks much bigger than the current Nordic Apollo.
Posted by Mac at 10:53 PM