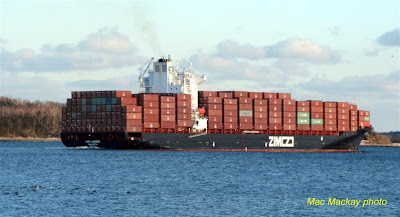 Zim Luanda sailed this afternoon after a call at Halterm. The ship is owned by Danaos Corporation, a Greek based shipping concern, but listed on the NY stock exchange. It charters its ships out to various major shipping lines, such as Zim.
Their web site has an interesting feature which shows the position of all their ships on a world map. See it at http://www.danaos.com/
Zim Luanda was delivered in June 2009 by Samsung Shipbuilding and Heavy Industries in Koje, Korea and can carry 4523 TEU of containers, including about 400 reefers. This is the typical size of ships on the Zim service which sails almost around the world. http://www.zim.co.il/
Her next port of call is Tarragona, Spain.
In the foreground a small portion of the winter eider duck population of Halifax.
Posted by Mac at 5:49 PM