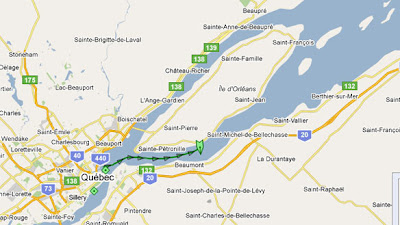 In anticipation of the elimination of duty on foreign built ships, and in view of their ageing fleets, some Canadian shipping companies have purchased ships from overseas. CSL (Canada Steamship Lines) and Algoma Central Corporation are at the forefront of this movement, picking up a half dozen ships in recent years.
Both companies acquired ships built to transit the St.Lawrence Seaway, but which can work deep sea. They have also laid up several of their domestic ships as a consequence, and we can expect to see a parade to the breakers when scrap prices warrant.
Regrettably (in my opinion) these acquired ships are far from new, and have been operating under flags of convenience, in some cases, for several years. At this time Algoma is running their ships under Bahamas flag.
On such ship is Algoma Discovery, which has not exactly distinguished itself in Algoma ownership, having been aground twice within the last few months. Most recently this morning she discovered the bottom of the St.Lawrence River off St-Laurent, Ile d'Orléans, just east of Quebec City.
What the screen grab above does not show is that the river is 100% ice covered, the ship had a list to port of 5% or more, and she was about 200 yards off shore.
Fortunately she did not plow in too hard, and found soft bottom. With the assistance of two tugs she was refloated at high tide and returned to Quebec for inspection.
The location is just down stream of the power cable crossing. One hates to think what might have been had she plowed into one of the supports.
In September she was hard aground on the River Weser in Germany and had to be lightered off to free her.
To add insult to injury she ran ashore opposite Beaumont, the site of a proposed LNG port, which has raised considerable opposition in Quebec. The foes of the LNG port were out in force following this incident spinning fantastical stories about LNG disasters- great fun! The St-Laurent wharf and marina, near the grounding, are accessed through a church and school yard, which added a dramatic backdrop to their protest.
Posted by Mac at 8:33 PM