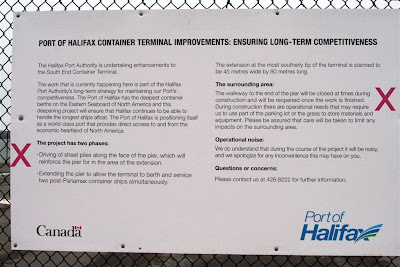 As one of the world's worst typists I should be more sympathetic I know, but it is hard not to gloat when someone else does a typo. Particularly when the message has obviously been heavily sifted through the PR department so as not to give too much away and to provide as little information as possible while seeming to be informative.
I speak of course of the newly erected signage at the breakwater alongside the Halterm container pier. I show above the English version only.
A little more proof reading would have been in order (1st red X)
The second red X has a contradiction in it - the walkway may be closed from time to time to facilitate work BUT it won't be re-opened until the work is done. Do we have a choice?
The breakwater is certainly closed now - because sheet pile work is going on very close to the end - fair enough.
Will it re-open when sheet pile work moves far away to the other end of the pier? Who knows.
When will construction work actually be completed? Who knows.
Will they start building the pier extension now or in year's time and will there still be a viewing area at the end? Who knows.
Regrettably the Port Authority does not see fit to tell us anything we really want to know. Just about everything on the sign would be obvious anyway, or has already been divulged in press releases or in new items.
Would it hurt to publish a drawing of the newly extended pier? It might surprise a lot of people if they actually knew how big is was to be and how the view to Eastern Passage will be blocked.
Would it hurt to give a timetable for the construction? If the walkway is to be closed all summer, say, that would not be good news for tourists and shipwatchers.
Most businesses, when undergoing renovations make some effort at apologizing for inconvenience but give reassurance that it will be better in the end for the customer. I fear that in this it will not be better in the end, that the new pier extension may have no provision for a viewing area, and may well be worse for the public rather than better in the end. The public, whose taxes after all pay for at least some of this work - are not the customers. Reading between the lines of the sign should be a subtle reminder of that fact.
Posted by Mac at 7:53 PM