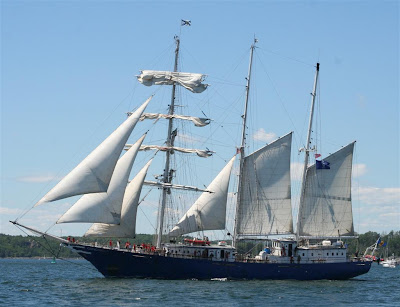 The Canadian owned sail training vessel Concordia sank off Brazil Thursday night. All 48 persons on board were reported safe after they abandoned the vessel to rafts. The Brazilian navy rescued them this morning, 500 miles offshore.
The 3 masted vessel, based in Lunenburg, left that port in September. At the time of the loss (apparently a capsizing) they were en route from Brazil to Montevideo, Uruguay. Many of those on board were high school or college students participating in the West Island Class Afloat program.
The photo above was taken July 20, 2009 when Concordia participated in the Tall Ships Parade of Sail in Halifax.
Very bad weather was reported in the same general area a few days ago when the Holland America liner Veendam encountered 11 to 12 meter sea and near hurricane winds. She had to evacuate an injured passenger to the Falkland Islands before continuing on to Cape Horn.
Update 2010-02-20:
More details have emerged on the actual rescue. The wood chip carrier Hokuetsu Delight picked up some of the survivors, and of these 11 were transferred by Helicopter to the Brazilian frigate Constituicao before flying conditions became too dangerous. The remaining 18 survivors were taken aboard another wood chip carrier Crystal Pioneer. All three ships will be arriving in Rio since conditions are still not favourable for airlifting then from the merchant ships.
If you want to see what the rescue ships look like, follow these links:
www.shipspotting.com/search.php?query=9167370&action=results
www.shipspotting.com/search.php?query=9363118&action=results
www.shipspotting.com/search.php?query=Constituicao&action=results
Posted by Mac at 1:25 PM