Wild Day in the Harbour 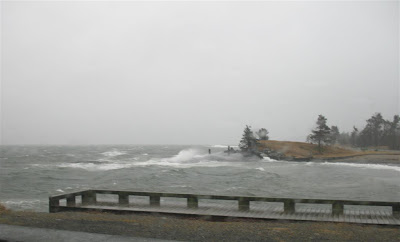 High winds, driving rain, storm surge - today has it all for those who love really rotten weather. No ship movements are scheduled until later in the day when things may have calmed down. However the tugs Point Chebucto and Svitzer Bedford are standing by the tanker Cap Felix at Imperial Oil dock 5, holding the ship onto the dock.
Usually these big tankers put out to sea before a big storm, but in this case the ship remained alongside. The winds are so strong and the seas so high that the ship could part its lines. The tugs will remain alongside as long as needed to prevent the ship from going astray.
Meanwhile there are three ships anchored in Bedford Basin. All are probably steaming up on their anchors to hold position.
Update:
It is now late afternoon and the wind has not died off one whit. The rain has let up a bit. Point Valiant has also been called out to assist in keeping a ship alongside. Not sure which ship, since I am inside where it is warm and reasonably dry.
High tide is 18:16 hrs and storm surge is expected to flood some docks and low shoreline.
Posted by Mac at 9:34 AM