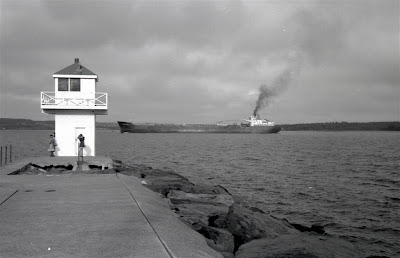 A sight, perhaps forgotten, and never to be seen again. This is the little lighthouse that used to grace the end of the breakwater at Halterm. When Halterm was built, the lighthouse survived for a time, but Halterm was eventually extended and this was removed, leaving the little "look out" spot overhanging the water.
The breakwater walkway, a favourite for many, especially ship photographers, is now closed during construction of the sheet pile reinforcing on the Halterm pier face.
The ship passing is Ontario Power, built in Port Weller, Ontario in 1965, to transport Cape Breton coal to Ontario. She was the second self-unloader built for Upper Lakes Shipping for this work, the first was named Cape Breton Miner.
Ontario Power operated deep sea in the winter.
In 1983 she was transferred to ULS International, and wearing the yellow seahorse on blue funnel, she was renamed Thornhill, and operated deep sea flying the flag of Vanuatu. In 1984 she was sold and renamed Akalli Seri and in 1986 became Kalli. She arrived in Kaohsiung June 9, 1987 and was scrapped.
I took this picture in April 1975.
Posted by Mac at 8:50 PM