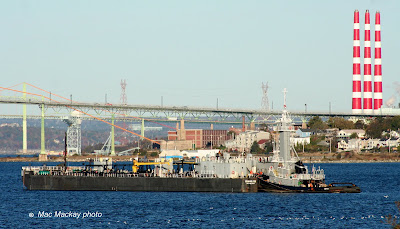 3. Tanker barge Penn No.120 with tug Penn No.6 waiting for better weather to the south.

The three oil docks at the Imperoyal refinery of Imperial Oil have been busy the last several days, with ships coming and going.
This afternoon the Canadian crude tanker Overseas Shirley sailed for Baytonne, NJ. Although she appeared to be in ballast she still had the tug Atlantic Oak on a stern line escort outbound. At 62,385 gross, 112,056 deadweight, built in 2001, she is a sizable tanker.
Shortly before her departure the chemical tanker Sichem Beijing sailed after an overnight stay at the dock. Registered in Singapore, she is 8537 gross, 13,068 deadweight, built in 2007.
She had to wait at anchor for a day before she could get in to the dock.
Her place had been occupied by the US flag barge Penn No.120, which along with the tug Penn No.6 has gone out to anchor pending an improvement in weather along the US east coast. As a wire tow tug (as opposed to an articulated tug/barge) she will only go sea when conditions are favourable. [see also Tugfax]
Awaiting the departure of Sichem Beijing and possibly an improvement in weather after tomorrows predicted high wins, the small Bahamas flag chemical tanker Clipper Lancer found an anchorage spot way up north in Bedford Basin. This tanker measures only 6522 gross, 9971 deadweight. Built in 2006 she has less than one tenth the carrying capacity of the Overseas Shirley.
The remaining space at the Esso docks has been taken up by domestic coastal tankers.
.
Posted by Mac at 7:38 PM