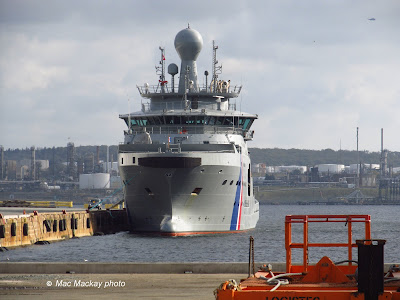 1. A lone Sea King helicopter flies in the distnace as Thor ties up at pier 27.

The brand new Icelandic Coast Guard offshore patrol vessel Thor made its first visit to Halifax today. In fact this is one of the ship's first port calls anywhere.

Just completed by the ASMAR yard in Chile, the ship has been a long time in coming. Laid down in 2007, it was launched in 2008. While fitting out in drydock at the shipyard in February 2010, it was struck by the tsunami following a major earthquake and was seriously damaged. At that time the ship was only three months from delivery, but damage was so severe that it has taken more than a year to effect repairs and complete the ship. The tsunami swept the ship off its support blocks, tossing it over on its side at a 30 degree angle and submerging its engine room.

The ship is a revolutionary one. Built to the Rolls Royce /Ulstein UT512L design, it is a larger version of a Norwegian Coast Guard vessel, but with more capabilities.

First it is a 10,730 bhp tug [Canadian Coast Guard take note.] It is strengthened for navigation in ice, it carries a helicopter landing platform and is armed. It is also equipped with a wide range of search and rescue and pollution control equipment. At 93.6m long and 4,000 tons displacement, it is a very big ship indeed, and should be able to operate in all but the most extreme conditions.

As an object lesson, a small nation like Iceland can justify a ship like this. Canada should too.
For more on Iceland's Coast Guard (called the LHG) see: http://www.lhg.is/media/LHG80/Landhelgisgasla_Islands_enska2_.pdf

.
October 22
Note on Comment: My "note to CCG" comment above follows the recommendation of the Department of Transport that a minumum 10,000 bhp rescue / escort tug was needed in Placentia Bay, and it should be provided by the government. Also that the British Coast Guard, French, Dutch, German, Spanish government, etc., rescue tugs in Europe have proved thier worth countless times (despite Britain's intent to cost cut them into oblivion) and the total lack of any such vessels on Canada's east coast. If the current Coast Guard's ineptitude in towing cannot be corrected, then the work should be contracted out, as it is in Britain and France, to private operators who do know how.