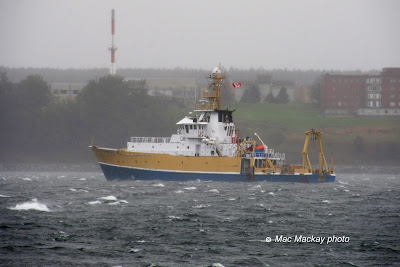 1. Coriolis II heads up into northeasterly this afternoon.

High winds, rain and a storm surge disrupted normal activity in the port today.
Early this morning Atlantic Compass arrived on schedule, but due to the wind took the tugs Atlantic Willow and Atlantic Hemlock to berth at Fairview Cove. In normal conditions the ACL ships don't need tugs.
The mid-morning arrival of OOCL Antwerp was scrubbed and the ship headed out to sea to ride out the storm.
Meanwhile in port the tanker Algonova headed to anchorage in Bedford Basin, where it joined Clipper Lancer. The tug/barge Penn No.6 and Penn No.120 remain at anchor in the lower harbour.
The only other movement was the research/survey vessel Coriolis II that returned to port yesterday after breaking off survey work for the Hibernia cable project. At first it tied up at pier 27, but it was too rough there and so it went out to the anchorages where it steamed up and down for several hours until coming in to pier 25 late this afternoon. With high winds forecast all night and another storm surge around midnight the ship may leave the dock again tonight.
The storm surge resulted in waves breaking over the piers and the pilot boat dock was almost awash when I went by about 1 pm.
.
Posted by Mac at 5:45 PM