Edward Cornwallis - time for a change 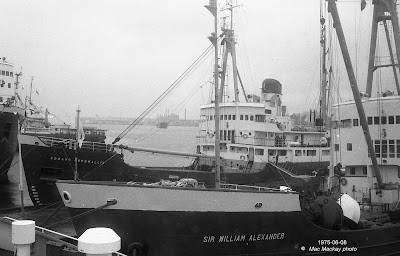 1. CCGS Edward Cornwallis (i) was built in 1949 for the Department of Transport, and joined the CCG when it was founded 49 years ago. It was a steamer and served with distinction until its replacement came along. It was eventually broken up in 1993.
[I took this photo on Coast Guard Day 1975, from the bridge of CCGS Alert. CCGS Louis S. St-Laurent and Labrador are on the left.] 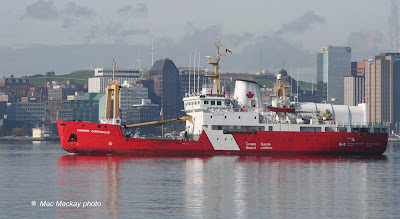 2. CCGS Edward Cornwallis (ii) was built in 1986 and has also served well. The City its namesake founded has changed with the times, and it is now time for a change. She is seen here leaving port October 24.

The founder of Halifax was one Edward Cornwallis, governor of Nova Scotia from 1749 to 1752. He has a river, a military base, at least one street, a park and many other places named for him, not to mention two ships. A Lieutenant-Colonel in the British Army he was later appointed governor of Gibraltar where he died. His brief time in Nova Scotia was marked by his terrible treatment of the indigenous population, and as a result he has now been discredited by many, and there is a move afoot to have his name removed from these commemorations.
This should also include the current CCGS Edward Cornwallis a navaids tender and light icebreaker, based in Halifax. It was built in 1986 and replaced a steam driven vessel of the same name built in 1949.
Both ships have served with distinction, but it is now time to make a change. There are many distinguished indigenous Canadian individuals who would be quite deserving of such an honour.
Next year marks the 50th anniversary of the Canadian Coast Guard - a good time to do the right thing.
.
Posted by Mac at 10:30 PM