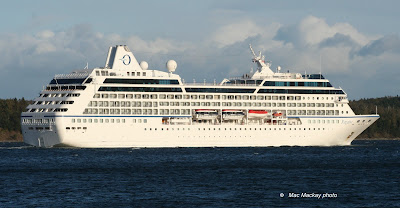 1. A few hardy souls take in the view from their balconies as Regatta sails on a windy and cool afternoon.


Of the five (count 'em five) cruise ships in port today, the smallest was Regatta. It was the only one making its first call in Halifax. It is the last ship of the season to make an inaugural call, so we will only be seeing the old familiar faces from now on.

Regatta was built in 1998 at Chantier de l'Atlantique in St-Nazaire, France as R-2 for the ill fated Renaissance cruise line. Laid up for a time when Renaissance failed in 2001, the ship was re-entered service as Regatta for Oceania Cruises. The ship is registered in the Marshal Islands and measures 30,277 gross tons. It was refurbished earlier this year and now has a capacity of 684 passengers with 400 crew to cater to their needs.