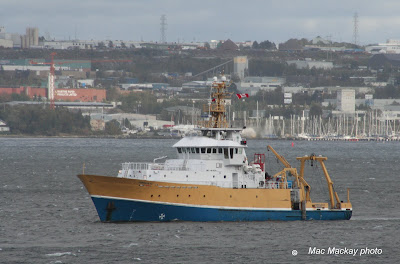 The research ship Coriolis II arrived in Halifax this week for the first time. It originally tied up at pier 27, but was noted today in Bedford Basin, where it was trying to establish an anchorage position in high winds. It may have given up on that option and decided to keep station using its engines, because it had no anchor down when I saw it last about 16:30 hrs.
The ship was built by Versatile Pacific Shipyard in Victoria, BC in 1990 as one of two 500 class Coast Guard cutters. Originally named CCG 501 it was to be a dedicated Search & Rescue vessel. In 1992 it was renamed John Jacobsen and its sister CCG 500 became Gordon Reid.
There were serious stability issues with the vessels, as I understand it, because the superstructures were built of steel instead of aluminum as originally designed. Gordon Reid was rebuilt in 2001 and John Jacobsen was renamed 2000-03 in the year 2000 and put up for sale.
It was subsequently sold to the Université de Québec à Rimouski and rebuilt in British Columbia as an oceanographic research vessel before arriving in Rimouski in July 2002. Total cost of acquisition rebuild and conversion was reported at the time to be $10 mn.
Since its arrival on this side of Canada, the ship has carried out a variety of programs on the St.Lawrence River and Gulf, but to my knowledge has never ventured out to the coast before. Now operated by a consortium of five institutions, you can see more on the web page: http://reformar.ca/spip.php?article8
A nice looking vessel, originally of Robert Allen design, the ship has accommodation for 24 persons.
Posted by Mac at 8:28 PM