ex CCGS Alert to the breakers 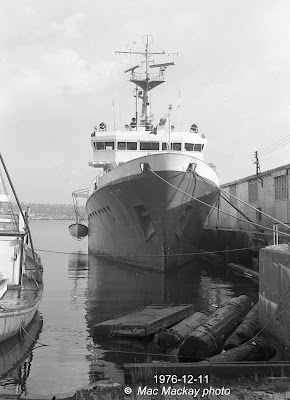 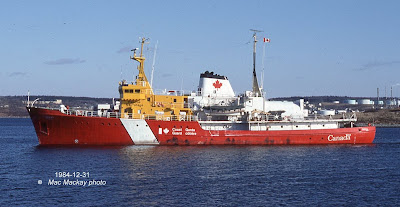 2. Intransition from her original white over red colour scheme, Alert returns from a patrol in 1984. 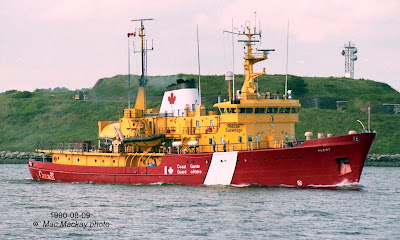 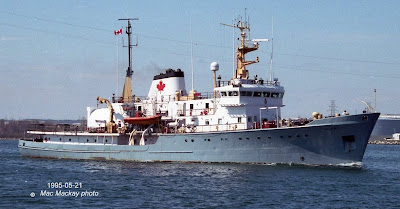 3. With a navy grey hull Alert sails on her last mission in 1995.
I have received word that the former CCGS Alert arrived at Aliaga, Turkey on October 23 to be broken up.
Completed in 1969 by Davie Shipbuilding & Repair in Lauzon, QC, the Alert was a specialized search and rescue (SAR) vessel. Davie was the low bidder at $6.2 mn, beating out Marine Industries Ltd, Canadian Vickers and Port Weller Dry Dock. The ship was powered with four Fairbanks Morse 12 cylinder engines driving two screws with controllable pitch props. She was also equipped with thrusters and a landing pad and hangar for a helicopter. Her gross tonnage was given as 1752.
Based in Dartmouth, the Alert figured in numerous rescues in her 25 year career with the CCG.She was laid up in 1994 but the in same year was then chartered to the RCN for reserves training and given a grey hull.
In February 1995 she was put back in service for one month to substitute for the CCGS Mary Hichens for SAR and Fisheries Patrol work. She was then laid up again on June 13, 1995.
In 1996 she was renamed 1996-01 prior to sale and was berthed in HMC Dockyard until March 1997.
She was sold and left Halifax in tow of the tug Arctic Sun for Newfoundland on March 7, 1997. She was to be converted for use as an offshore standby vessel, and renamed Ocean Alert. Her new owners were careless about advising Lloyd's, but she remained in Canadian registry until 2000 when she was transferred to "a Commonwealth port".
She migrated to the Panama flag and eventually Sierra Leone, with owners listed as OVH Inc, but she was working for Odyssey Marine Exploration of Tampa FL. These publicly listed treasure hunters have been in the news lately for finding significant shipwrecks.
Ocean Alert's sphere of activity appears to have been in the Mediterranean in the last three or four years. She was fitted with a stern gantry and deck house aft, increasing her gross tonnage to 1455, and she was used in survey and diving operations.
CCGS Alert was not the first vessel in Canadian government service to carry this name. A previous Alert was built in 1856 by HMDockyard, Pembroke for the Royal Navy. A wooden barque, it was rebuilt in 1874 for the Sir George Nares arctic expedition. In 1884 it was on loan to the United States Navy and was instrumental in the rescue of the Greely Expedition.
In 1885 it was loaned by RN to the Minister of Mines and Fisheries of Canada and sailed from Halifax May 27 to explore and chart parts of Hudson Bay, in part to look at the possibility of building a port to serve a rail line from Winnipeg. It broke its stemplate off Resolution Island, but was able to complete the mission returning to Halifax October 18.
From 1887 to 1894 it served as a lighthouse supply vessel in the Gulf and on the Labrador coast, but was then laid up unfit. In 1885 it was sold for scrap. It was hulked then burned out for its fastenings at Beauport Beach, adjacent to Quebec City.
Panelling from its cabins was used to finish a summer house at Cap-à-l'Aigle, QC, fittingly called "The Alert." Unfortunately that building burned to the ground. One of the only remnants of the ship is therefore its wheel, which resides at the Coast Guard base in Quebec City.
.
Posted by Mac at 11:28 AM