Both Halifax container terminals are disposing of old, obsolete or broken down container cranes. This is not a positive sign for increasing the port's capacity since neither of the terminals has revealed plans for more cranes.
Clearly something must happen soon or further ship delays and reduction in throughput time will only worsen. 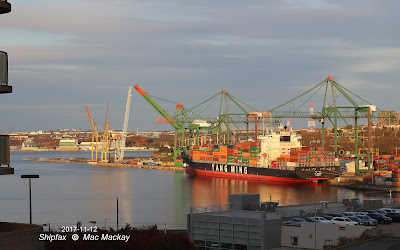 Two of the three large cranes work the YM Express this afternoon at Fairview Cove. Demolition is  underway on one of the older (and much smaller cranes) at the west berth.

Ceres at Fairview Cove, there is now only one berth operational. The west berth has large post-Panamax size cranes, but the terminal needs two working berths (or more) to meet demand. Ships are forced to anchor awaiting availability. Tomorrow the arriving Bayonne Bridge will anchor in the Basin all day until Itea clears the berth. 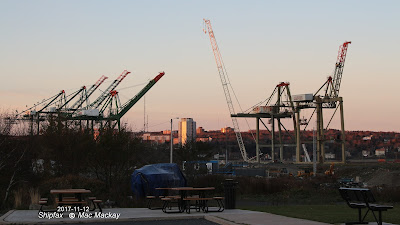 With lots of room for berth space, the terminal will need more cranes to meet demand.

Fairview needs at a minimum two more cranes, but three would be better, and all need to be able to handle (old) post Panamax ships, since those ships can fit under the bridges and reach Bedford Basin. 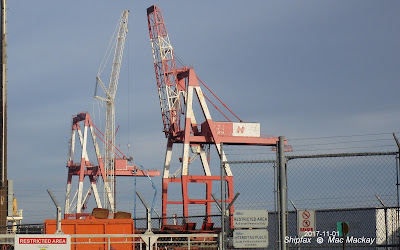 Work is well advanced on the second of three cranes to be dismantled at Halterm.

At Halterm, three obsolete cranes that have not seen service for several years are being scrapped. The first is gone and the second is about half-way down. A fourth crane that has been out of service for months may also be on the list. It served pier 36 and the two ships that regularly call there (it is also a RoRo berth) have not had crane access. 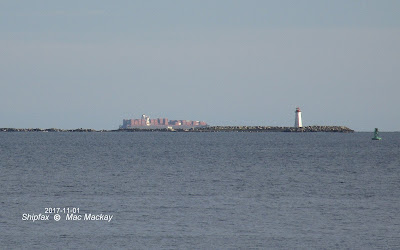 The 10,062 TEU ZIM Djibouti awaits its turn at Halterm, anchored outside the port limits.

Despite tremendous growth in container traffic this year, both terminals need to work ships without delay, and anchored or waiting ships is not a good sign in the container business.

Halterm needs one more large cranes on the pier 41-42 berth (and another 500 feet or more of berth length) just to meet current needs.


My short term plan for relieving pressure on Halifax street traffic would see at least four if not five lines move from Halterm to Fairveiw Cove, since all use small ships and rely on truck delivery for a high percentage of their cargo. These are:
St-Pierre et Miquelon (containers and RoRo)
Melfi
Maersk / CMA CGM
Tropical
Oceanex (containers and RoRo)

This move would certainly justify a berth extension and new cranes at Fairview, and relieve the pressure on Halterm while necessary enlargement of berths takes place. But quick action is needed, since container cranes cannot be delivered over night. Fairview Cove would also need more land area (which is available) and more rail capacity.

Halterm would still have the large ships traffic from ZIM and CMA CGM  and the ability to use all its cranes to move the containers to trains more quickly and to an inland distribution terminal for transfer to trucks.

I estimate it will take five years (if there is a start today) to expand Halterm to meet demand from these expected larger ships.

This week another 21,000 TEU ship came into service on the Asia Europe run. Once thought to be science fiction, these huge ships are all too common now, and will force the previous behemoths of 10,000 plus size to move to smaller routes. Even ships of 10,000 TEU (the largest yet to call in Halifax) need six to eight cranes to move cargo with any kind of decent speed. If two ships of that size arrive at the same time..... 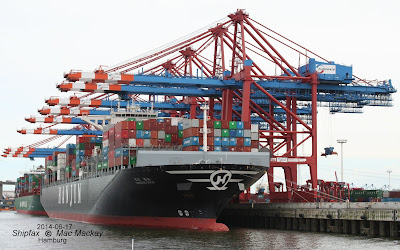 Projections for 2018 are that there will be 78 container ships of over 10,000 TEU delivered new from shipyards. With a world container trade increase expected to be near 5% the new deliveries (allowing for a substantial number of ships to be scrapped) keep supply ahead of demand by less than 1%. Even so, bigger and bigger ships will continue to call in Halifax, and only Halterm will be able to handle them. The pressure they will put on roads will clearly be intolerable unless there is more ship to rail transfer.

A proper multi-modal logistics park is clearly needed, well out of the built up area of Halifax. Since the current rail line is well underutilized, such a facility would serve both container terminals, but in my mind it must start by getting Halterm truck traffic off the streets. Terminal to terminal transfers must also be reduced and that would be accomplished to a certain extent by the shipping line relocations mentioned above.

I hear that heavy negotiations are underway between the Port, the City and CN, and I hope that there will be some announcements soon.