Two ships arrived today and both their names begin with the letter T.

The tanker Transsib Bridge arrived from Beaumont, TX with a cargo of refined product for Imperial Oil. Operated by SCF, better known as Sovcomflot, a 100% state owned Russian corporation, the ship is also Russian built, by the Admiralty Shipyards in St.Petersburg in 2008. The company specializes in oil and gas transportation, and was founded in the Soviet era to bareboat charter ships as a means of financing fleet growth. Following its merger with Novoship in 2008, the company has become a very large operator with more than 150 ships under its control, totalling more than 13mn dwt. 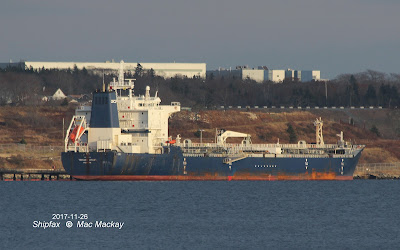 Four prominent tug markers share space on the ship's flank with locators for eight manifold connections. There is also a red flash at the foot of the gangway for pilot visibility.

Of course the ship's name celebrates the controversial Trans Siberian gas pipeline (Transsib), although the Trans Siberian Railroad is also referred to as Transsib in some quarters. It is a typical mid-range size tanker of 27,725 grt, 46,564 dwt. Managed by SCF Management Services (Dubai0 Ltd, it is flagged in Liberia.


The second T ship, is hardly a surprise visitor. Tongala is a regular caller for Wallenius Wilhelmsen since it was built in 2012 by Mitsubishi, Nagasaki. At 61,106 gert, 25,585 grt, it has a capacity of 6,459 cars, and although classed as a PCTC (pure car and truck carrier) its 300 tonne stern ramp allows it to carry a range of RoRo traffic. It has often unloaded at Pier 31 in Halifax with miscellaneous RoRo cargoes , but this time around it will only visit Autoport. 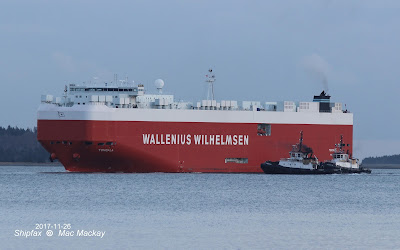 Atlantic Fir scurries to take up the bow position and Atlantic Oak makes up aft as Tongala proceeds inbound in the Middle Ground area.