The anniversary date of end of the First World War on November 11, 1918, is set aside as a special day for many Canadians. Ceremonies are held at several monuments in the Halifax region, but there are other reminders of wars too.
One of particular relevance to Halifax Harbour is the "The Last Steps" memorial arch at the Maritime Museum of the Atlantic pier where CSS Acadia (a veteran of the two World Wars) is berthed. 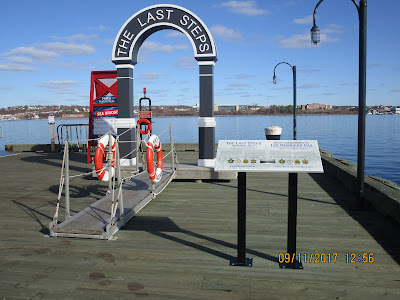 Featuring a gangway and a life ring inscribed with the name of His Majesty's Troop Ship Saxonia, the arch is intended to remind us of the 350,000 troops  that embarked at Halifax piers for both World Wars, 60,000 of whom did not return. Bootprints on the pier and gangway are a stark reminder of the latter.
An interpretive panel bears the phrase "Nova Scotia played a role in the conduct of the War which will redound to her glory for all time" (referring to the First World War, but applying equally to the second). That Nova Scotia, and Halifax in particular, played a key role as a naval base, embarkation port for troops, and rallying harbor for convoys is still well known. But a yearly reminder is a necessary way of commemorating those who sacrificed much for their country.


In a two weeks' time, Halifax will be remembering another anniversary directly tied to that First World War. December 6 is the 100th anniversary of the Halifax explosion. More on that closer to the date.


For more on the memorial arch see: Canadian Memorials