As the last of three Halterm container cranes diminishes in size. (Scrappers are dismantling it in pieces. The truck trailerable pieces are then sent off to a scrap yard for further cutting) I have reports that fourth container cane on pier 36 will not be dismantled. It is apparently used every Friday to work SPMI's Nolhanava on its weekly run to St-Pierre et Miquelon. 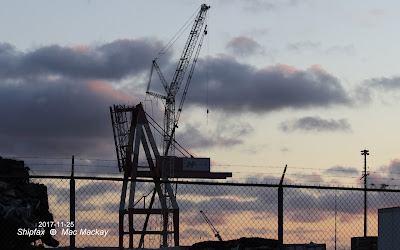 I assumed it might be on the list, since its boom is apparently never raised. This may be because the ship is so small it does not need to be raised. Oceanex used to use pier 36 also, but now only occasionally and then it seems only for RoRo. As the last pre-Panamax crane, its usefulness is therefore limited, even though it was built to move back and forth to pier 41-42.

Meanwhile at Fairview Cove the crane dismantling appears to be nearly complete, with no visible portions remaining above dock level.