The tanker Torm Carina arrived Friday from Ijmuiden, Netherlands (sea lock for Amsterdam) with another load of refined product for Irving Oil. A 30,024 grt, 46,291 dwt tanker, built by STX Shipbuilding Co, Jinhae, South Korea in 2003 it was originally named Guld Falk for the Italian d'Amico company. In 2005 it was sold to Torm A/S of Denmark, renamed and painted in their distinctive orange colour scheme.

Although tied up at Irving Oil's Woodside dock, neighbouring Imperial Oil's tanks are visible in the background, complete with Imperial's new corporate badge. The familiar Esso oval is gone or going.

In Bedford Basin the heavy load carrier Forte is anchored awaiting its next assignment. It delivered the jack-up rig Noble Regina Allen November 7 and remained in number 1 anchorage in the lower harbour until November 15 when it moved to long term anchorage. Specialized ships such as this one often are often idle for extended periods between gigs. 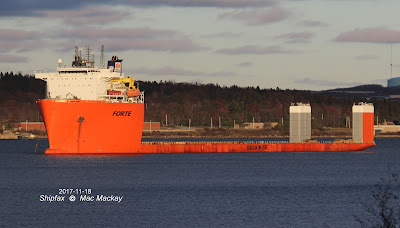 Also in Bedford Basin the supplier Atlantic Condor was just completing some exercises with its fast rescue craft. 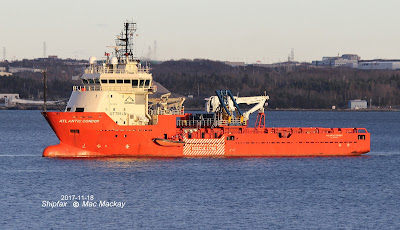 Halifax Shipyard built the vessel in 2010 for a ten year contract with Encana to support the Deep Panuke gas project. With that project under performing (and in fact not producing at all according to recent reports), Encana is looking for contractors to begin dismantling the topsides structures. 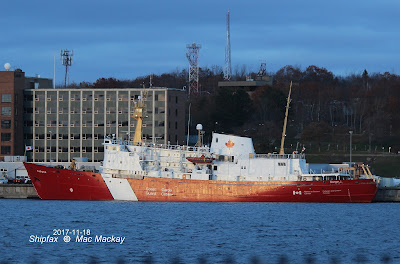 And at the Bedford Institute, CCGS Hudson is back at its old stand. It arrived November 13 from Hamilton, ON where it was in refit. That refit was supposed to be complete last spring, but as time went on the Coast Guard became concerned that the ship would be trapped on the Lakes when the Seaway closes for the winter at the end of the year. They then took the unusual step of  re-possessing the ship from the Heddle Marine Shipyard. After couple of weeks alongside the CCG base in Hamilton the ship was able to sail November 8 and made a bee-line for home.

The Coast Guard has not revealed what work remains to be done on the ship and when it will return to service. The extended refit meant that many planned research programs had to be postponed, cancelled or transferred to other ships.