Two service expansions from the Port of Halifax were announced this week. 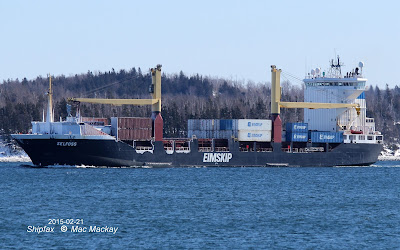 Eimskip has announced a third vessel has been added to their Iceland /Argentia, Newfoundland/ Halifax / New England service. Selfoss will be re-joining Skogafoss and Reykjafoss to accommodate a slot arrangement with CMA CGM to serve New England. ( The ship had been added previously in 2015when Eimskip operated a Europe/ North America direct service without transshipment in Iceland, but has reverted to the previous mode with Iceland as the hub.)
There has been mention of Newfoundland bound cargo from Halifax for Eimskip and that remains a possibility (see below).


Several stand alone New England feeder services have run out of Halifax over the years, with varying degrees of success. By adding on to an existing service, CMA CGM may have struck on the best arrangement. 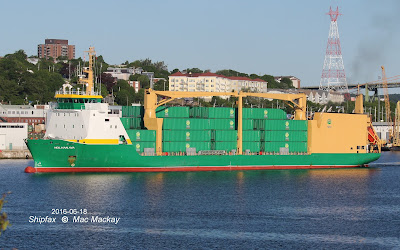 SPMI, which runs a weekly RoRo and container service out of Halifax to St-Pierre et Miquelon will now add Argentia, NL to its port rotation. Their ship Nolhanava has been serving the St-Pierre route for which it was built as Shamrock. Adding Argentia seems a natural expansion. Under old cabotage regulations, it was questionable if the ship could carry Canadian cargo between Canadian ports, even if it called in the foreign port of St-Pierre en route. With the new European free trade agreement, it can remain registered offshore and carry cargo between Canadian ports. There has been no exclusive arrangement with any particular line, so presumably they will carry anyone's cargo - container or RoRo to Newfoundland.
Oddly the ship was registered in Canada for one day September 1, 2017 as Nol Hanava.


Meanwhile at Argentia, Eimskip is completing the commissioning of a new 450 tonne capacity crane which will be available to all port users on a commercial basis. 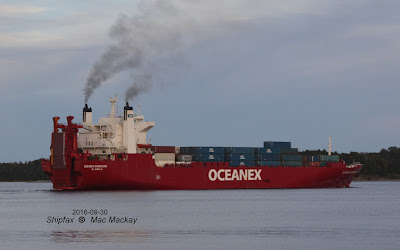 Oceanex, the other Newfoundland service out of Halifax serves only St.John's. It used to serve CornerBrook, but that port was dropped due to low traffic and the time it took using their ASL Sanderling. Particularly in winter, it was not always possible to keep a weekly schedule with that ship. Since then Oceanex has been able to maintain a twice weekly service from Halifax to St.John's in peak demand times.
Oceanex is already coping with the competitive advantage of Marine Atlantic as a subsidized service. As part of the terms of Confederation when Newfoundland joined Canada in 1949, the Canadian government is obliged to maintain the ferry service from North Sydney. Oceanex is disputing this in court, but no outcome has been reached. More competition will surely not be welcome news for Oceanex, particularly if it siphons off regular traffic from some of its prime customers.

All four lines use Halterm.